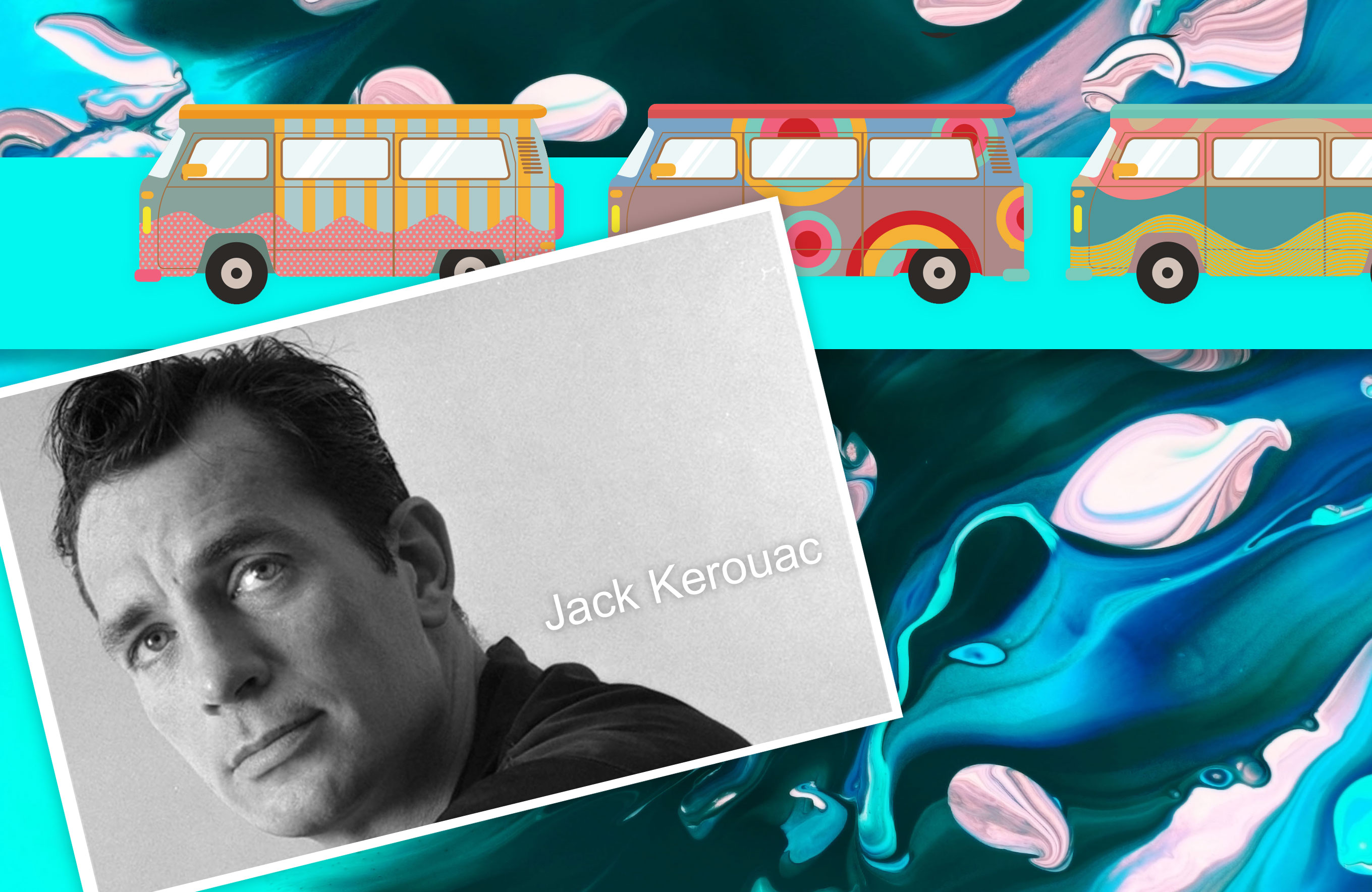 On the Road to Nirvana

“Charlie Parker looked like Buddha. . . . and his expression on his face was as calm, beautiful and profound as the image of the Buddha represented in the East. The lidded eyes, the expression that says ‘all is well.’ . . .Charlie Parker had the speed to reach what the speedsters wanted and what they wanted was his eternal slowdown.”

“Eternal slowdown” was a phrase Kerouac used to describe the sound of God. Musicians have been trying to hear and replicate divine noise since the beginning of time; in primal chanting and drum beats to call down the gods to earth, Greek choruses, transcendent Indian ragas, and sacred music of all stripes. In the Sixties, musicians would continue the search for the lost chord and experiment with mystical music traditions, to which they added psychedelic lyrics and ear-bending electric feedback. Many were inspired to embark on the road to eternal slowdown by Jack Kerouac’s spiritual journey, particularly in The Dharma Bums and his other writings about Buddhism. Tormented beyond endurance on many fronts, Kerouac was attracted to the Buddhist philosophy that life is suffering, but there is a way out, attainable by an Eight-Fold Path of spiritual endeavor. Buddhism described a state of consciousness beyond the ravages of time and pain in an ever-accelerating universe: Nirvana, Satori, eternal slowdown.

When Kerouac discovered Buddhism, years before he met Zen student Gary Snyder and wrote The Dharma Bums, there were about eleven books on the subject published in the United States. Kerouac had some awareness of other forms of Indian philosophy from references in Thoreau’s writing. Thoreau and the Transcendentalists had learned and wrote about Vedic and Hindu ideas. Many of those ideas are also contained in Buddhism. A basic tenet of many Eastern philosophies is that all material life is illusory, and that there is an underlying reality that transcends all the multifarious differences, time, and space. This eternal, unchanging reality of life can be realized through meditation and expansion of consciousness.

In 1954 Kerouac read a translation of Buddhacarita, The Life of The Buddha, written in the first or second century by Ashvagosha, founder of the Mahayana school of Buddhism. Mahayana, “the great vehicle,” features a heavenly host of celestial Buddhas, angelic and demonic figures, and many layers of heaven and rings of hell. It related more directly to Kerouac’s Catholic upbringing than the more spare Chan school of Buddhism founded in China and known as Zen in Japan, to which Gary Snyder introduced him. Kerouac could hardly have imagined how Buddhism has since captured Western sensibilities, and how words such as ‘nirvana’ and ‘Zen’ are now employed to flog products to people defined as “consumers,” the very antithesis of their roots in a tradition that states that the material world and all its toys bring only suffering. Many musicians craved that eternal slowdown and expressed it in melody and song.

“There is a direct connection to qualities of pursuing anti-materialist, peaceful, spiritual purpose,” replied Dennis McNally to my question about Kerouac and spirituality. “What was going on with the Beats was a call to re-spiritualization,” said McNally.  “They look around America in the mid-Fifties and they see a country that had endured a terrible depression, World War II and then prosperity. And each of those three things resulted in pressures to conform. If you had been in my father’s generation, which was Kerouac’s generation, you have been hungry in the thirties, and you go through the war and you make that sacrifice and thank God you get home, hopefully in one piece. And then you get the good job and you’re able to move out into the ‘burbs as part of this incredible social movement. And then on top of that you have McCarthyism and the whole set of political characteristics. The unspoken message is: conform and confine your religiosity, for instance, into a few channels, which is to say, Sunday from 11:00 to 12:00. And what Allen and Jack were about was exploring, not religiosity, per se, always, but spirituality, whether it was through the ‘divine derangements of the senses’ a la Blake, with drugs, or Allen’s and Jack’s considerable researches into Buddhism.”

Donovan echoed the same sentiments about his parents’ generation in England. “The Britain I was brought up in—the Britain of the 1950s and early 1960s—appeared stiflingly respectable and ruled by an intellectually bankrupt authority. It was gray, lacking poetry and spiritually sterile. But in the Beat and bohemian circles in which I was now moving…a new spirit was stirring. It was a spirit inspired by old music and new writing.”

Donovan emphasized the inspiration he drew from the Beat poets in general and Kerouac in particular to inform his spiritual search. He had just learned Transcendental Meditation when I saw him perform at Winterland in San Francisco in 1967. Forty years later in 2007 he talked to me about the role of poetry and meditation in giving power to the common people to transform the world.

“I guess when I was fifteen Jack Kerouac’s book, On the Road, was very influential. And what was more exciting was the word ‘Zen’ in The Dharma Bums… .And so I got involved reading the Beat poets and reading about Zen Buddhism and reading about Hindu philosophy and the word ‘meditation’….Because the power of the poet is connected to meditation. Because the shaman, the ancient poets really were shamans, and they chanted, and they used a drum, and they danced, and they led the tribe into the inner world to understand their lives better.

“All this added up to me. I would now become a singer-songwriter, a shaman. I would now re-discover that I am a shaman. I would re-discover in a previous life I had been a shaman and a poet. And through Allen Ginsberg and Kerouac I became aware of Buddhism first, and then Hinduism and then Taoism. And then I discovered our own lost spirituality in the Celtic lands which some people called Druidism, the bardic tradition where poets were priests.”

Chris Johnson, who organized benefit rock concerts for the Farm Worker’s Union in San Francisco and also worked for Bill Graham, sees Kerouac’s influence on the rock musicians of the sixties as a transference of spiritual energy, as a moving forward of power. He told me in his home in Iowa, “My perception is that Kerouac played a role in invoking the energy of the mid-Forties and Fifties and from there it moved forward,” he said. “The next link was the San Francisco music scene—especially the Grateful Dead. Jerry Garcia was strongly influenced by Kerouac. Spiritual energy moves and finds channels, and I think that whereas Kerouac brought it to a certain stage, the San Francisco scene started it to happen, especially with the Dead, it was so central to whatever was synthesized there that ignited the whole thing. When you look at the flow of energy, such a high intensity of it came through the Dead. There was the practical connection of Neal Cassady and the Dead. Ultimately it’s pure energy: the spiritual energy was becoming more vibrant through music.”

It was a fundamental feeling of the time, that the arts, particularly music and lyrics, were a medium for spirituality and would bring about profound social change. There was a power in the combination of music and words that created free thinking, a free life, free expression, joy and freedom from suffering. That Kerouac, a tortured young man largely enslaved to alcohol and his mother would come to symbolize that freedom, and whose words would inspire millions of people to look within is yet another poignant contrast of “the ten thousand things,” as Buddhist sutras described the material world. Kerouac might have seen the Promised Land, but he could not go to it in his alcoholic fog.

“Some of the Dharma goes into his alcoholism and why he couldn’t meditate and take on that life of Buddhism seriously, because you can’t do that when you’re drunk,” said Ellis Amburn. “I was glad that he could see that.” However, he pointed out the way to the promised land for others.

By embracing Buddhism, bebop, blues and rock, Kerouac also placed himself in the roiling center of an old paradox that reared its head in hundreds of ways during the Sixties: How do you integrate, or do you integrate or keep separate the sacred and the profane, the body and the spirit? writers and musicians had long been grappling with that question. Some did both without qualm. For others it was one or the other.  And then along came Jack, finding in jazz, blues and rock the purity and truth that he tried to express in the written word. At the same time, he was searching for enlightenment and salvation in the austerities of Eastern mysticism. The same paradox comes up repeatedly in different guises, as contemporary music is inevitably condemned for corrupting youth and expressing Godless sentiments, while youth expresses the longing for God, truth and spiritual experience in thousands of songs.

I was born and grew up in Berkeley, California. Virtually every major happening, demonstration and protest in the San Francisco Bay Area in the 1960s saw me front and centre. I studied with and worked on the staff of Maharishi Mahesh Yogi, the founder of the TM organization, in Europe and in India. I have a B.A. in Art History from Oakland University in Michigan and a BFA from California College of the Arts.