When I was young I would sometimes stay overnight with my grandmother and grandfather during summer vacations in Havertown, PA. Nana was a huge baseball fan and we’d sit outside on the porch after dinner and listen to the games on the radio. She loved the Philadelphia Phillies and, to my mind, was the original Phillie Phanatic. Nana married John when I was 11, a year after my biological grandfather died. John was the dearest, sweetest man and was more of a grandfather to my siblings and cousins and me than our biological. He wasn’t as much of a baseball fan as Nana and he couldn’t hear very much, even with the huge hearing aid he wore in his left ear, but he loved to sit with us on the porch when the games were on. Nana and I would listen intently while John would sit with a large cold bottle of Schlitz beer that he poured into a glass. When he’d see us get excited about something, he’d say, “Hokie Nellie!” as if he knew what was happening and give me a wink. 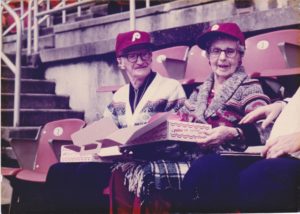 One of the umpires lived around the corner from Nana and John and most days after a game, Nana would sit on her porch and wait for the ump to stroll by so they could do a post mortem on the previous night. It was fascinating to sit and listen to them dissect every pitch and every play. As much as Nana loved the Phillies, she loved Tug McGraw, the relief pitcher, even more. She’d tell the ump, “Give Tugger a kiss from me,” whenever he got up to go home. In 1980, when the Phillies won their first World Series, Tugger got the last out by striking out the opposing hitter with the bases loaded. Nana was in baseball heaven. Most diehard fans have a player who symbolizes all that’s good about their team, and for Nana, Tug McGraw was it.

Nana instilled a love of baseball in me but it wasn’t until I moved to Manhattan and walked into the old Yankee Stadium for the first time in 1985 that I developed an abiding love for a team. I still can’t fully describe what it was, but when I walked into the seating section behind home plate and saw the black batter’s eye across center field, heard the infamous bleacher creatures chanting the player’s names, and smelled the over 60 years worth of Yankee fans’ sweat embedded in the original blue plastic seats, I was completely smitten. After that first time, I went to Yankee Stadium every chance I got. It was easy and cheap to get tickets then—the Yankees weren’t winning and nobody was going to the Stadium, so I’d buy $8.00 tickets for the nosebleed section and after the 3rd inning the security guards would let you move down behind the dugouts or home plate close to the players and the action.

While Nana had Tug McGraw on the Phillies, I had Derek Jeter on the Yankees. When he was called up at the end of the season in ’95, you could tell there was something special about him, and in ’96 when he won rookie of the year and helped the Yankees win their first World Series since ’78, it was the start of a 20 year love affair for me and most other Yankees fans as well. Derek brought leadership and a winning attitude back to the Yanks and five World Series championships. He played the game as it should be played—with good sportsmanship, hard work, humility, putting the team ahead of himself, and not a whiff of scandal. He was the consummate role model, though I’m sure he would never have described himself that way.

Derek’s final season in 2014 got me through the worst time of my life. I was being treated for late stage breast cancer and had to undergo intense chemotherapy and radiation treatments. The Yankees weren’t winning that year but for the first time, it didn’t matter to me. All that mattered was almost every night I could watch Derek play his final games, watch as every team honored him when the Yankees were on the road, and listen as the standing ovations he received in his first at-bats were as loud on the road as they were at home. Not only did Derek Jeter symbolize all that was good about the Yankees, he symbolized all that was good about baseball. In true Derek Jeter fashion, in his last game ever in Yankee stadium, in the bottom of the 9th inning he got a hit and won the game. I was in baseball heaven.

I’ve never understood when people say baseball is boring, when they say the games take too long and the season is too long. In life, like baseball, we go through periods of excitement, periods of fallowness, times when we’re winning, times when we’re losing, times when our strategies and decisions are paying off and times when we have to regroup and set another course, just like a baseball season. From the outside, baseball looks very different than it does from the inside, just like our lives and our relationships. When someone is doing something well, whether it’s playing baseball or living their life, they make it look easy to the casual observer. The outsider doesn’t see the work that’s involved. Take a look at these videos and you’ll see how much thought, preparation and practice go into each and every pitch and each and every swing of the bat. “That’s church,” as Frank Thomas says in the batting video.

I’ve stayed loyal to the Yankees since the 80’s, over half of my life, and I will be loyal to them until the day I die. Baseball is like life. It’s a long game.