Marriage: No More, No Less 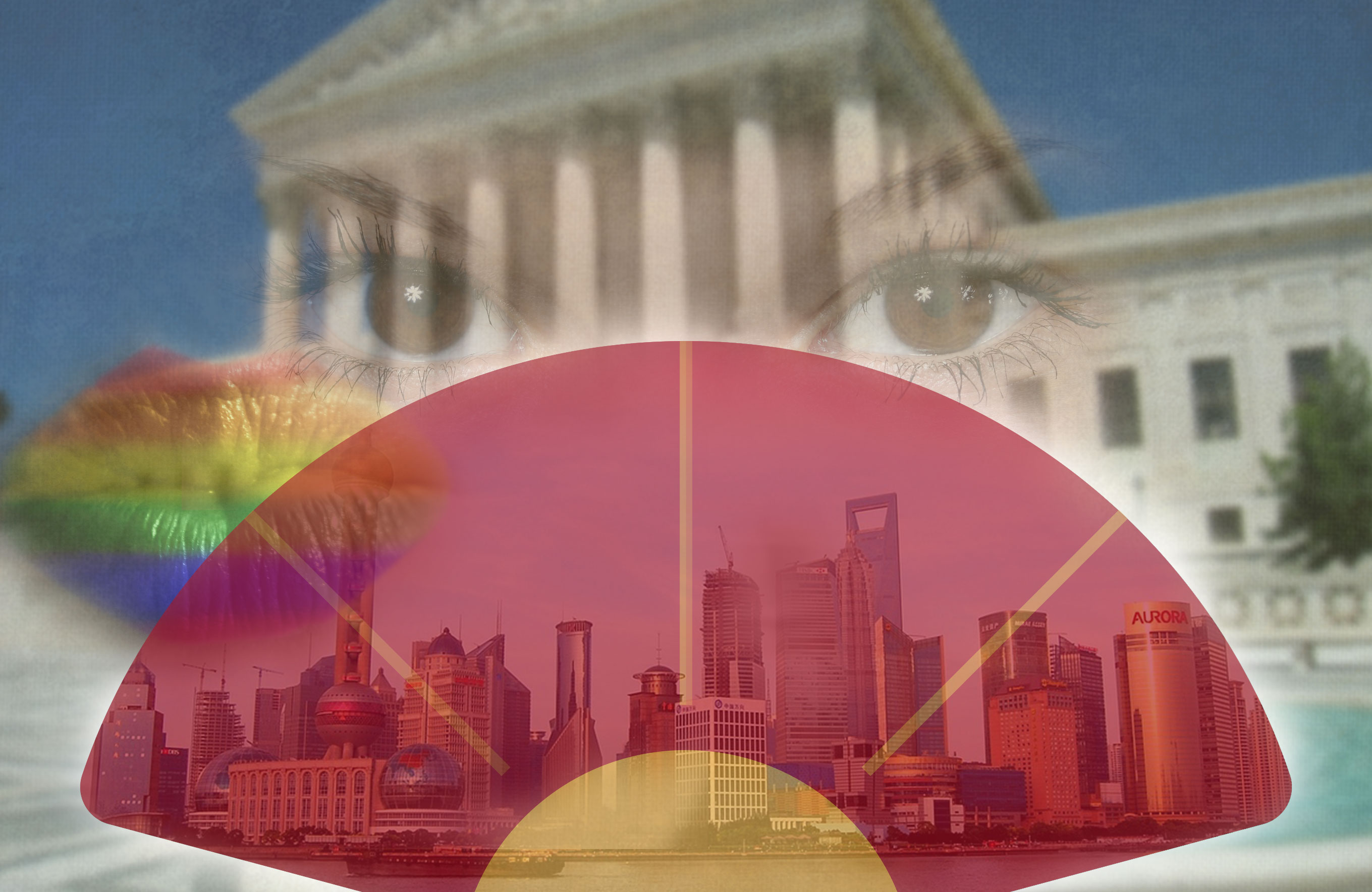 Lisa woke up at 4:00am on April 28, 2015, excited that this day, the day the U.S. Supreme Court would hear oral arguments on same-sex marriage, had finally arrived. As she made coffee in her kitchen in Santa Fe and stared at Orion twinkling in the pitch-black sky—she thought about the wedding she and her spouse, Sheila, had in New York City in August 2013. Although they had been together for 25 years the day they exchanged vows, they had to cross state lines to get married just as Sheila’s parents had in 1960 due to miscegenation laws because Sheila’s mother is Chinese and her father white. There they were, 53 years later doing the same thing Sheila’s parents had done but for different reasons. The irony was not lost on them.

The day they had the wedding of their dreams – the wedding they planned, saved for, talked about and deeply desired for 25 years, the wedding where they felt everyone’s joy and love envelop them as they walked down the aisle together—their marriage was legal in only 13 states. They left New York on a high, only to get back to Santa Fe and realize that the marriage certificate they framed and hung with pride in their living room meant nothing in New Mexico. They weren’t considered married in Santa Fe, the place they called home, the home they bought to retire to, an adobe house in a neighborhood with no streetlights to better see the night sky, the home they bought to feel safe and secure in, to live out their dotage in as a ‘we’.

This was not a new situation for the women. None of the other places they’d lived together – Massachusetts, Michigan, New Jersey, Texas, Connecticut, Shanghai, China, Hong Kong, or Italy—had recognized their relationship when they lived there. Every time the women moved they started over, began anew, feeling more married than most of the people around them, but with no official status or recognition. Every move was a step up but in many ways felt like a step back, like starting all over again.

To wake up to this day, a day full of hope, fairness, legitimacy and equality—was something Lisa had dreamed about but never, ever thought she’d see in her lifetime. She was glad she was in the U.S. that day. She watched endless hours of television coverage of people joyously kissing on the steps of the Supreme Court, holding hands and waving equality banners. As she watched and listened and saw what people were posting on Facebook she was brimming with hope and optimism that Sheila and her marriage would soon just be a marriage, no more or no less than their straight friends marriages no matter where they went in their own country.

After she tired of watching the pundits say the same things over and over Lisa sat down to fill out an application form for the new 10-year tourist visas China had begun to hand out. A 10-year visa was also something Lisa never thought she’d see in her lifetime and the idea of getting a 10-year China visa was almost as exciting as the Supreme Court hearings. Lisa and Sheila had lived in Shanghai for five amazing and thrilling years and Lisa hadn’t been back to Shanghai since they moved six long years ago. She had never felt more alive, more at home than she did when they were living in Shanghai, the city where her heart still continued to live. It was time to return. When she heard about the 10-year visas she wanted one badly. She missed Shanghai and her friends terribly.

They moved to Shanghai with an admonition from Sheila’s company not to tell anyone about their relationship, with a rigged up visa situation for Lisa, a scheme concocted by a relocation company that Sheila’s human resources people consulted with. During the course of their five years in Shanghai Lisa had 15 visas, most lasting six months, some lasting only 30 days. She’d gone in and out of China to Hong Kong to get new visas more times than she’d gone in and out of the closet each time the women moved over the course of their years together.

Eventually, Lisa’s luck ran out during the run up to the 2008 Beijing Olympics when the government decided that foreigners might cause trouble protesting about human rights. She was hauled into the Exit and Entry Police in Shanghai and interrogated twice. Hong Mei, the human resources director of Sheila’s company came with her to the police station and both times the police separated Lisa and Hong, put them in separate windowless rooms with rickety metal folding chairs, beat up metal filing cabinets and wood planks that served as desks and interrogated them. As the questions became more pointed—why have you been in China so long, where do you get your money from, who is paying for your apartment, why do you travel around China so much, who really sent you to China, why are you really here—the air became more stale and Lisa became more and more anxious and hoped that the beads of sweat on her upper lip, forehead and the back of her neck wouldn’t implicate any kind of guilt to her young pimple-faced interrogator or to the faceless person manning the security cameras positioned around the room.

Because she had been in China for so long and had so many visas the authorities thought Lisa was either a spy or a tax dodger. After more than four hours of intense questioning, the most frightening hours of Lisa’s life, four hours where every second she wondered if she would either be sent straight to jail or escorted directly to the airport and put on a plane never to return, four hours where she thought she might literally foul her pants because she could not say the real reason she came to Shanghai, the authorities decided she wasn’t a spy or a tax dodger. But to save their face and to get her foreign face out of China before the Olympics started they told her to leave within 10 days.

When Lisa said goodbye to her friends she didn’t know if she would ever be able to return, didn’t know what Sheila and her immediate future would be. Where would they live? What would happen with Sheila’s job and career, their life? They’d spent their life together continually relocating, starting over, always planning their next move. As many times as the women had engineered their moves and the changes, this was a slapped face, a slammed door with no new beginning and felt more foreign than any of the countries Lisa and Sheila had moved to.

The irony also was not lost on Lisa that she was filling out the China visa application on the day of the Supreme Court hearings. When Lisa got to the marital status section of the visa application she hesitated. The categories were married, never married, widow/er but the answer wasn’t simple and straightforward like it was for straight married couples. Yes, she was married, but not everywhere in the U.S. Even though she and Sheila had a proper marriage license, it wasn’t valid in every state and it certainly didn’t mean anything in China. Should she check married or never married? She mulled over all the possibilities—if she checked married then she would have to put her spouse’s full name down. Would checking married prevent her from getting a visa when they saw a woman’s name as her spouse? Would that make it difficult for Sheila further down the road to get visas since she frequently traveled to China for work? Lisa wasn’t really married as far as China was concerned so maybe she should check never married. But if she checked never married how much research would the Chinese consulate do? If someone Googled her, their wedding announcement from the New York Times would come up. Would checking never married be the lie that prevented her from getting a visa?

Lisa consulted with Sheila who suggested that she check never married.

“Lisa, please just check off never married. I don’t want any trouble for myself when I need to apply for a new business visa. Anyway, China doesn’t recognize our marriage,” Sheila told her.

“But we’re married! Being married is like being pregnant—either you are or you aren’t, Sheila.”

Lisa sent an email to an expat friend who’d lived in China over 20 years and asked her opinion. Her friend reminded Lisa that Chinese officials aren’t bothered by what foreigners do so long as they’re not proselytizing to the Chinese people and that it was probably better to be gay and check married than for Lisa to say she was a writer in the occupation section. A few minutes later the friend sent another email and said on second thought Lisa should check never married—that was the safer bet and it was better to be safe than sorry.

It felt fraudulent, demeaning and downright depressing, but Lisa checked never married, sent the application off and waited. She was convinced she would be denied or given a one time 30-day visa, not the 10-year multiple-entry she’d applied for. At least she was in the US in her own home waiting to get the visa, not sitting in a hotel room in Hong Kong wondering if she’d get back into China and wondering where she would go if she didn’t. When her passport came back and she’d actually succeeded in getting the 10-year visa she’d applied for she was jubilant. It felt like a victory – like some kind of karmic payback for all the stress she’d endured.

Soon after Lisa received the 10-year visa, Sheila received a promotion. This time the women moved to Sweden—a new town, a new country and a new continent to start over in. What a difference a decade and a country made. When it came time to get visas, for the first time in 11 years as an expat couple, they entered Sweden on a family visa. When it came time to fill out the paperwork to obtain their Swedish ID’s, on the line that asked, “What are the circumstances of your move to Sweden?” Lisa happily wrote, “I am a trailing spouse.” The woman who was processing their paperwork asked to see their original marriage license, made a copy of it and said, “Welcome to Sweden.” Simple as that.

Everyone’s marriage is equal in Sweden. Nobody cared one way or the other about the women being married to each other. Their marriage was no more and no less than anyone else’s. What was inside their hearts mattered, not the physical shape of their bodies. That was something else Lisa never, ever thought she’d see in her lifetime.

Even though they were doing what they’ve always done—relocating and beginning anew—this was the first time, both as expats and in the U.S., that they were legitimately a couple. Lisa wondered if they were starting from such terra firma how much further Sweden would take them.